We’re back on the water after last weekend’s noreaster threw us for a loop. Water temps are gradually rising again with the pleasant and overdue warm weather. Water clarity was pretty murky towards the end of the week, but gradually started clearing up in parts by the weekend. We caught fish each of the last two days, though the bite got spotty on the slack tides. Water temps ranging from 47 to 51 degrees in most areas. The east side of the flats near the Northeast river channel has been providing the best fishing. Got one close to 30lbs. on Friday evening.

Here are some photos from Friday’s trip with Chris and Adam. Nice catch guys. 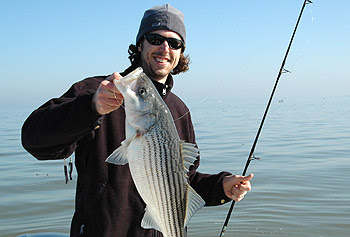 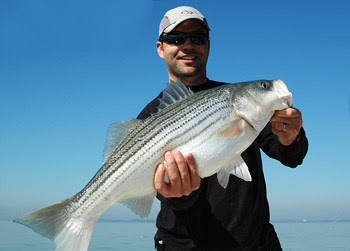 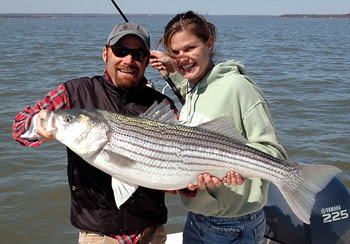 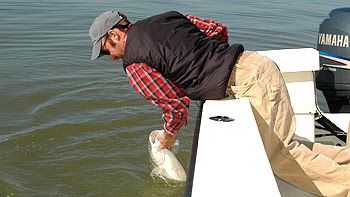 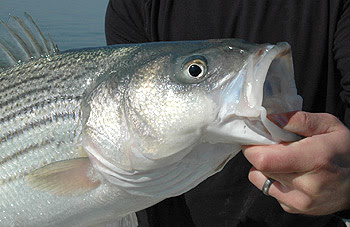 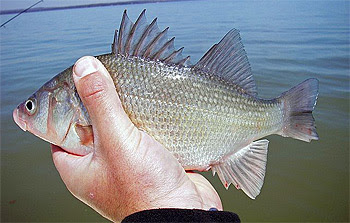 Once a Hokie, always a Hokie.  My thoughts are with all of you.
Posted by Chris B. at 1:20 PM No comments:

Blown Out on the Susquehanna Flats, Chesapeake Bay

Gale warnings and big rain in most of the Chesapeake Bay region have kept us from fishing the last few days.  I was hoping to get back out fishing on the flats today, but no luck with still heavy winds.  River levels are surprisingly stable for the moment, though the water is a bit dirty.  Hopefully we won’t get any big push of runoff and we’ll be back at it Thursday.  I’ll keep you all posted.
Posted by Chris B. at 12:51 PM No comments:

We’ve been busy fishing the Susquehanna Flats all week, and doing quite a bit of catching. The wind just won’t seem to stay calm this Spring, and temperatures have been much lower than normal all season. It has made for some cold mornings and tough conditions, especially for the fly fishermen on board. Nonetheless, we managed to catch some really nice striped bass.

Here are some of the highlights:

Russ Weber and Bill Spire were on board Tuesday. They paired up and landed some of our biggest fish of the season. 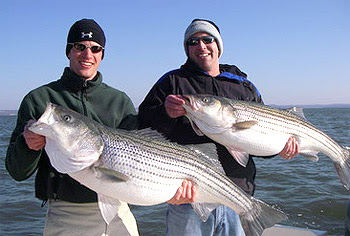 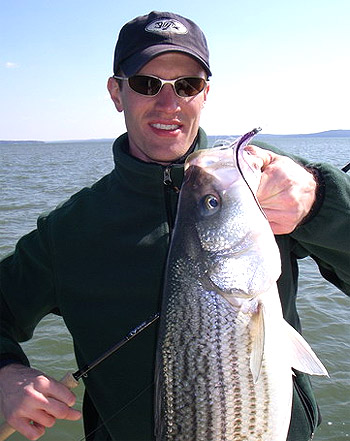 Russ, always a hot hand, landed numerous big fish on the fly, and is pictured on the left above with Bill with his biggest to date fly caught striper. We figured it to be 30 +lbs. It ate a purple/white 3/0 deciever. Bill finished off the double with a nice fish of his own he caught on a albino bass assassin jig, and then landed the monster below which taped out at 49 1/2 inches and was in the 50lb range. Bill holds claim for now to the biggest fish of the season for us. It will be a tough one to beat. 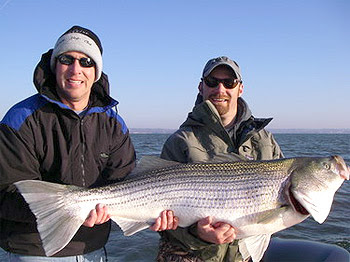 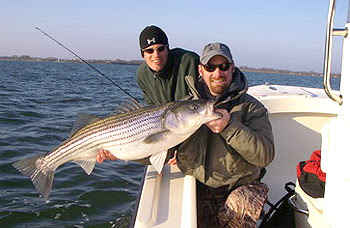 Dan Nadler, and friends Bill Castle, Gary Smith, and Ed Rich came in from Pittsburg on Thursday under the threat of big winds and rain to fish for three days. Toughing out the weather paid off for them, and they are pictured below ,as listed, with some of their best fish. We didn’t meet our goal of bottoming out the 30 lb. boga grip, but we were within 4 lbs. , not too shabby, and we caught a bunch of other fish. 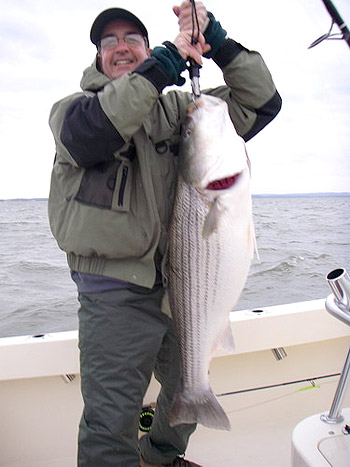 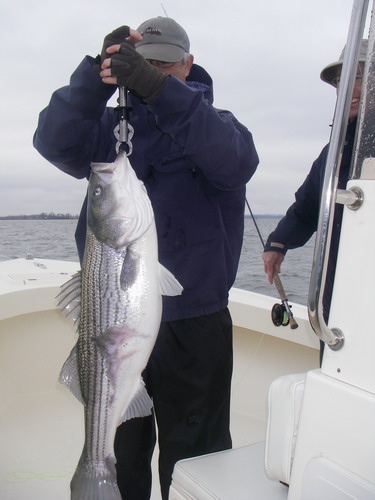 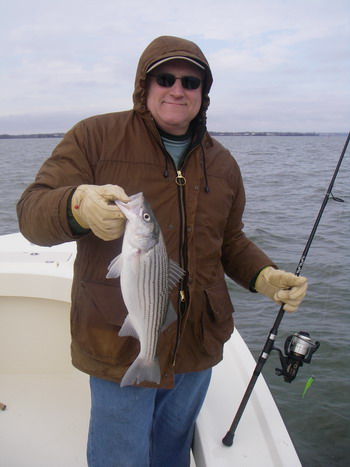 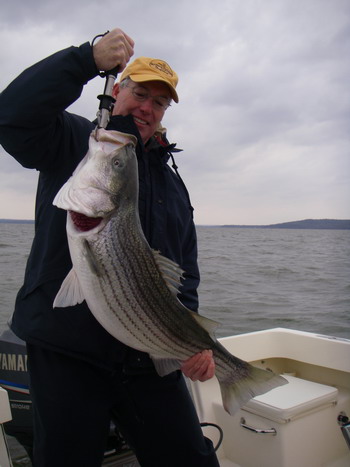 and a couple more… 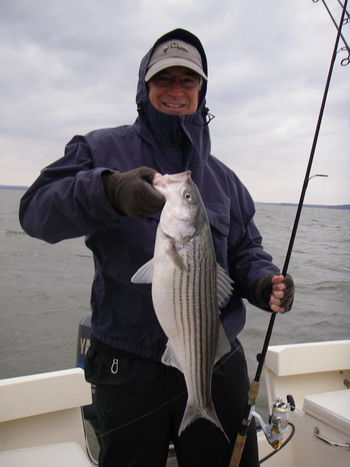 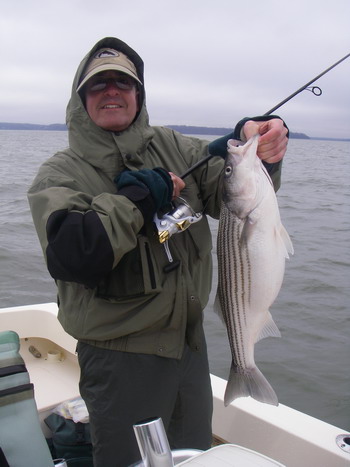 Talley Kovacs along with husband Louis, and dad Rick who flew in from N.Carolina finished off a great week yesterday evening, catching stripers on the flats just shy of the catch and release line. Again, just barely beating the poor weather we were able to catch some fish. Talley and Louis, pictured below, both caught their first stripers on a fly rod. Pretty work. They look like old pros posing for pics. 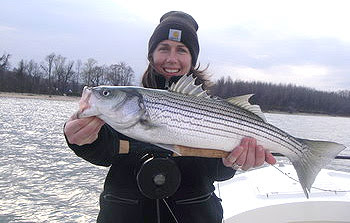 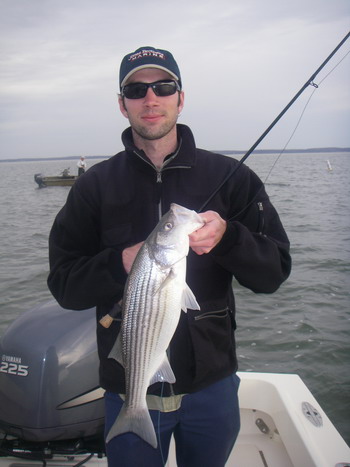 Thanks also to Brett Coakley pictured fishing in the background above who helped put us on the fish last night.

The fish took a variety of flies and lures all week. The old reliable chatreuse and white half and half proved lethal as always. Close second were black and white and purple and white 3/0 decievers. We fished all sinking tip lines in 250-300 grains.

Best lure bets were a half ounce soft bodied jig. Chartreuse (a given), white, albino, and black shad worked good too. Jerkbaits took some good fish, and the surprise catcher of the week was on a gold Tony Acceta spoon #14 which caught us lots of fish.

Most of our fishing were in 6-10 feet of water on channel edges. Not much action on topwater for us yet, though we didn’t try much. Today and tomorrow a blow out with gale force winds and heavy rain forecast. We’ll get back at it on Tuesday.

As always, I thank all of you who came out fishing and fished hard.
Posted by Chris B. at 1:25 PM No comments:

Well we finally got catching. It was cold this morning. Air temps in the 30’s with a stiff breeze. Water temps about 45. Cold. It took a few hours, but they bit. These photos, just from this morning, could be a highlight reel of a season on the flats. 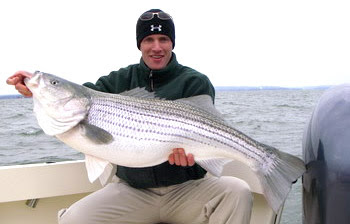 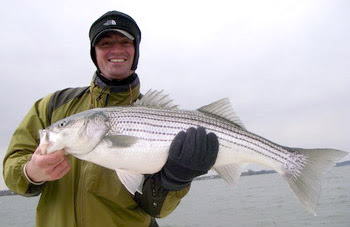 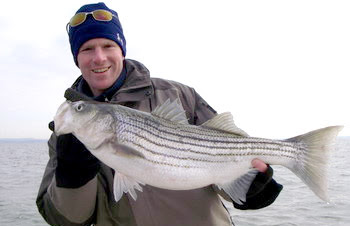 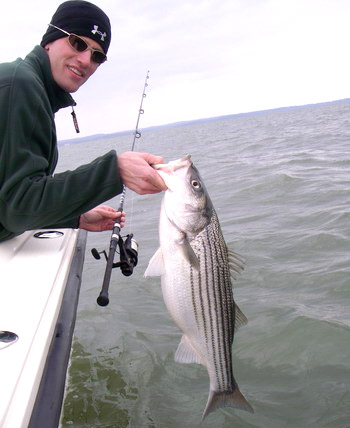 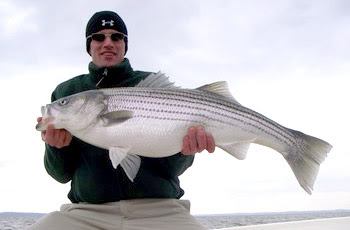 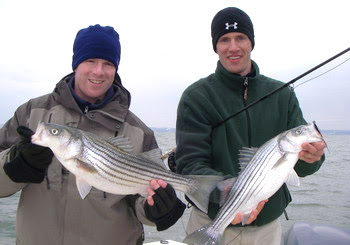 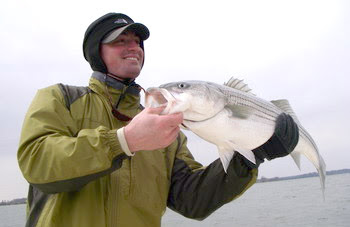 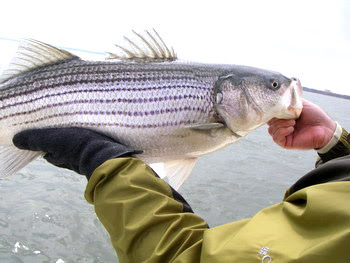 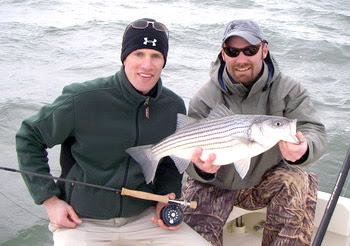 Nice Job Russ, Ryan and Kurt. Some really nice striped bass caught on flies and lures, and just a few from the day. Let’s hope this is just a preview of things to come.
Posted by Chris B. at 1:31 PM No comments:

We’ll, since we can’t seem to get started striper fishing due to weather, we’ve been spending lots of time fishing the Gunpowder.  As I reported last week, the blackfly hatch on the upper reaches of the river has provided much of the action.  The fish are particularly  selective during this hatch, so you have to get creative with things.  I generally start with small dries in the size 20-22 range, and sometimes go as small as 24.  A pattern gray with black ribbing works good with a cdc or sparse antron wing.  sometimes I fish a pair of them, one bigger so I can see them.  At other times I will put the slightest amount of indicator putty about 6 inches above the fly if I have a hard time seeing it. 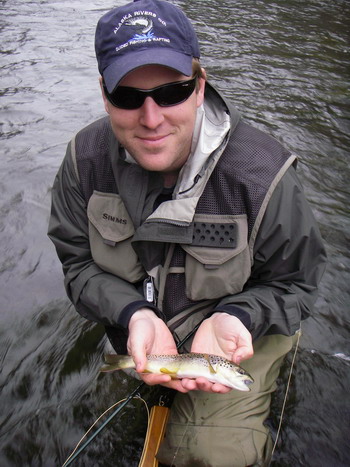 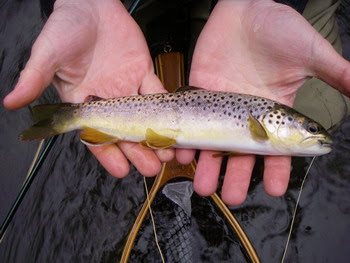 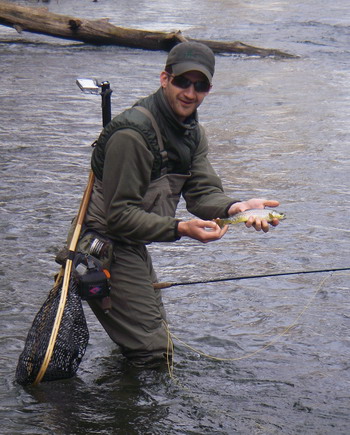 I got these pics of Charles Cooper and Jason Du Pont while they were fishing above Falls Rd.

If the dries just don’t work, you can always add a little bit of weight and fish your dries as nymphs/emergers under  a short indicator.  This technique was responsible for many of the trout these fellows caught this day.  Typical of the Gunpowder, not always monster trout, but unique in that they are streambred.  10-12 inchers are the norm, but always some big ones around. The blackflies will start to taper off with warmer weather, but we will look forward to our early Spring mayfly hatches.  Quill Gordons, and Hendricksons  will bw the first to appear.  For any of your Gunpowder River Fly-Fishing needs, be sure to stop by the Backwater Angler in Monkton MD.  Our riends there have the latest stream info. and best local fly patterns.
Posted by Chris B. at 1:34 PM No comments:

How about the lovely weather.  To avoid cursing too much, I will keep this upddate short and sweet. It was snowing this morning on my ride to the boat. I was so cold by the time I got to the south end of the flats to fish that I could barely tie my fly on.  The wind was blowing a steady 15-20.  I didn’t catch any fish.  Enough said.  On a brighter note, the water is clear and fishable.  Visiblity 2 feet + in spots.  Water temps still holding in the 50 degree range.  The forecast for the week is good.

The trick to beng a good fishing guide is being eternally optimistic,  but man, this season is putting me to the test so far.  We will catch fish Monday.  Happy Easter Everybody!
Posted by Chris B. at 1:33 PM No comments:

O.K. , we’re still sitting on the bench waiting for our chance to fish the Susquehanna Flats.  The stripes are there, and being caught regularly as reported yesterday from numerous fisherman fishing cut bait.   Yes, you can actually fish bait there during the season as long as you use a circle hook and release the fish of course. Cut or live herring are the chunk of choice , and the guys fishing it do quite well.  Fly Fishing, as we know is another act all together, and the fish need to see the fly to eat the fly.  Water clarity therefore becomes the issue, and as of this morning we are looking at about 1 foot of visibility .  This makes targeting the fish on a fly ,or lure for that matter, real tough.

The good news is that the river is clearing daily, and we have great water temps, about 50 degrees in most areas.  We are literally a day away from catching fish.  So, I am trying again this afternoon and keep you all posted.
Posted by Chris B. at 1:36 PM No comments: